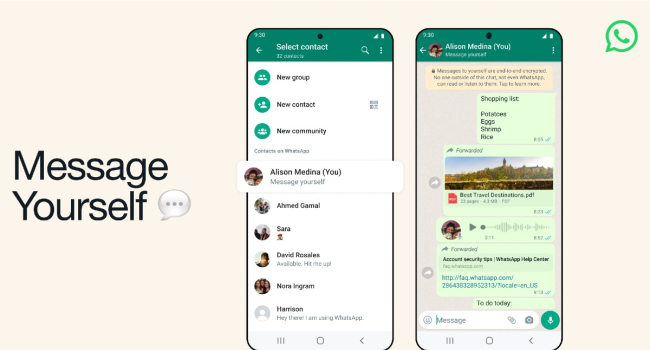 WhatsApp enables sending messages to yourself

WhatsApp has revealed new function 'Message Yourself' which enables sending messages to yourself. The chat can also be anchored, providing yourself easy access to the necessary information and reminders.

Creating a chat with yourself is pretty easy: You just need to open your contact list and select your number.

According to TechCrunch, the new feature was initially tested by beta testers, and in the next few weeks, it will be available to all Android and iOS users.

Many other platforms have long had the ability to send messages to yourself. For example, in Telegram, there are Saved Messages, which allow you to send and forward messages, pictures and documents to yourself. You can also save your notes and reminders there.

Signal also has a similar feature, Note to Self, which allows you to create messages for yourself.

And the Slack community platform has a space called Note Something, where users can send notes to themselves.

Anew feature recently appeared in the beta version of WhatsApp for Android, number 2.22.24.18, which gives the ability to use a single account on multiple smartphones at once.

In a major update, WhatsApp introduced several new features, including Communities, designed to facilitate group communication, and the ability to make video calls with up to 32 people.

The messenger also recently added the ability to conduct polls in private chats, set a virtual avatar and speed up voice messages by a factor of 1.5 and 2.

Another new feature called Call Links makes it possible to use a link to invite users to join a group call - whether it's a video call or a voice conversation.