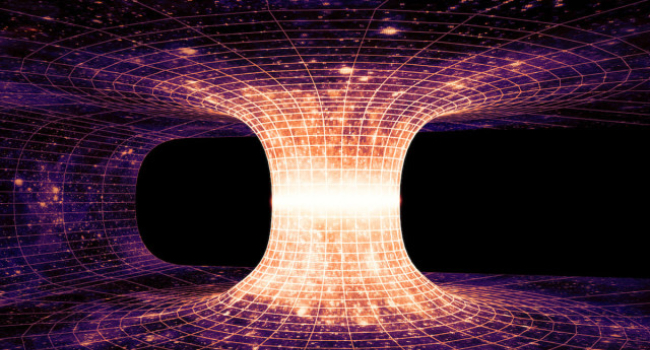 Several articles have been published in the scientific press at once about wormholes—space-time tunnels through which one can theoretically move to other galaxies and even universes. Scientists report that for the first time they have managed to physically capture a part of our galaxy that resembles a space-time tunnel and is only 1,566 light-years away from Earth; very close by astronomical standards.

The hypothesis that there may be tunnels in the space-time structure that allow instantaneous travel across vast distances, travel through time, or between parallel universes was first proposed in 1935 by Albert Einstein and Nathan Rosen. Later, American physicist John Archibald Wheeler coined the term "wormhole" for the "Einstein-Rosen bridges."

Traditionally, a classical wormhole is represented as a three-dimensional tube in a curved two-dimensional space. This does not contradict general relativity, but most scientists believe that such tunnels are only stable if they are filled with exotic matter of negative energy density, which creates a strong gravitational repulsion and prevents the cavity from collapsing.

However, there are also other opinions. For example, Pascal Koiran, professor of computer science at Ecole Normale Superieure of Lyon, published calculations according to which exotic matter is not needed to pass through the wormhole at the level of elementary particles.

Researchers at the Complutense University of Madrid have compiled a complete mathematical description of a wormhole with ordinary fermions, such as electrons and positrons, which have quantum wave functions and interact through classical electromagnetic fields. Scientists have shown that a wormhole is passable when the ratio of the total charge to the total mass inside it exceeds the theoretical limit used for black holes. However, these wormholes, as it turns out, are microscopic in size, and therefore a person cannot pass through them.

American physicists Juan Maldacena of the Institute for Advanced Study in New Jersey and Alexey Milekhin of Princeton University have proposed a solution based on the Randall-Sundrum model, which uses the device of string theory and describes the world in a deformed five-dimensional space-time perspective. There, wormholes have grown large enough for a person to travel through them to a neighboring galaxy in less than a second.

Wormholes may only exist on a micro level and are only accessible to high-energy elementary particles, but there is still hope for finding larger “portals.” According to astrophysicists, entering it is similar to entering an ordinary black hole. It is an area of powerful attraction.

Russian scientists at the Pulkovo Central Astronomical Observatory also think so. However, they note that the nearest such object is 13 million light-years away.

Recently, Bulgarian physicists at Sofia University have compared the probable spectrum of a radiating ring of gas in the wormhole's gravitational field with an image of polarized light from the accretion disk of a static black hole and found that they are almost identical, with a 4% difference in polarization intensity and direction. But in the case of lensing, where light from a distant object is bent by the gravitational field of a closer body, the polarization at the entrance to the wormhole is almost a factor of one greater than that of a black hole.

In addition, theoretically, a part of the light coming from the other side of the disk can pass through the wormhole. The material swirling around the wormhole should also behave differently, especially particles that approach the edge of these objects.

Those behind this research believe that based on this, the Event Horizon Telescope (EHT), which was created specifically to observe black holes, will be able to identify potential "portals." The EHT consists of a network of radio telescopes spread across the Earth. With its help, astronomers received the first image of the M87 black hole in the Messier 87 galaxy in 2019, and the Sagittarius A black hole in the center of our galaxy—in 2022. 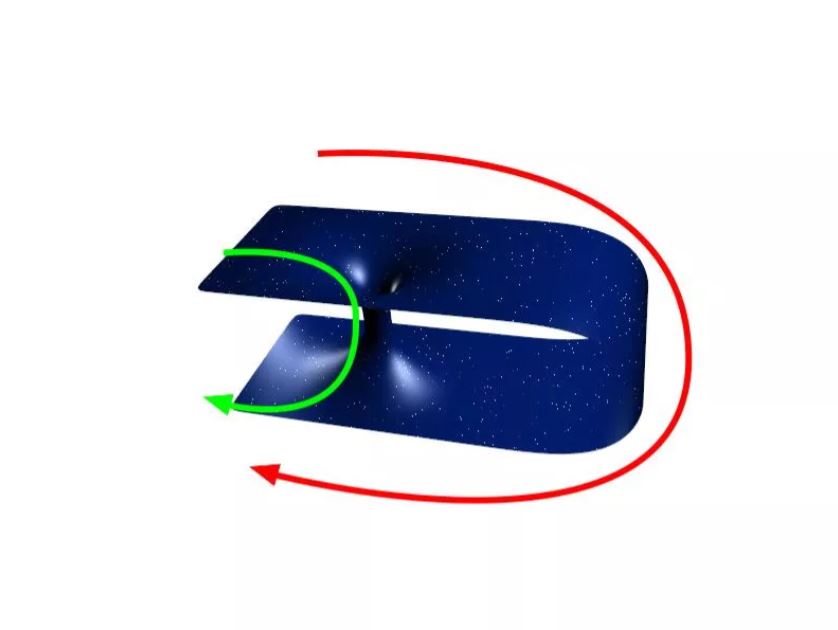 Wormhole in two-dimensional space. Green is the short way through the wormhole, red is the long way through normal space.

It is believed that there are millions of stellar-mass black holes in the Milky Way, and some of them may be the so-called "mouths" of wormholes. It is likely that there are such somewhere not far from us—of course, by astronomical standards.

American and German scientists recently reported that they had discovered the closest known black hole, called Gaia BH1. It is about ten times the size of the Sun and is 1,566 light years from Earth. This may be a wormhole.

Gaia BH1 has a Sun-like star orbiting it. Usually, in such binary systems, the black hole is "fed" by the star, simultaneously emitting powerful X-rays. But this black hole does not attract matter to itself and does not radiate anything. Astronomers conventionally call such mysterious objects "sleeping" black holes. They have never before been found in our galaxy.

The aforesaid discovery was made thanks to the Gaia space telescope, which recorded an additional gravitational influence on one of the stars of the Ophiuchus constellation. The light came only from it. The location and mass of the invisible object was theoretically calculated. Scientists have no doubt that this is a black hole. The existence of Gaia BH1 was later confirmed by data from the ground-based Gemini telescopes. 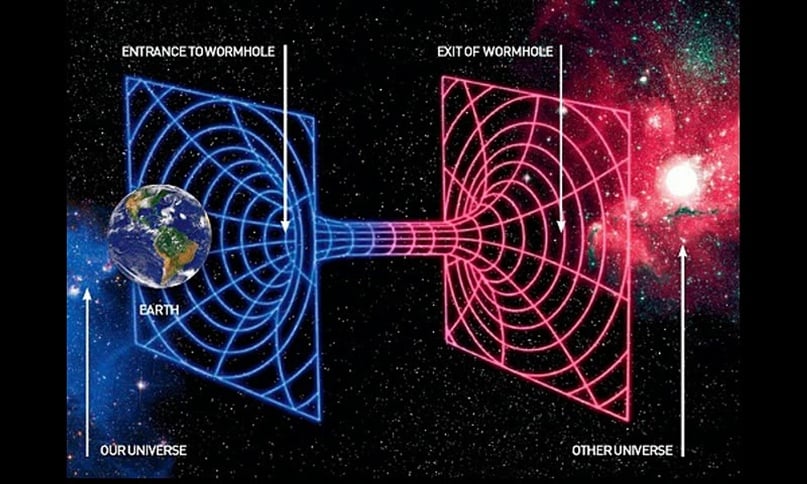 An artistic representation of a wormhole between two universes.

According to Australian and Canadian physicists, black holes and wormholes may have properties characteristic of quantum particles. In other words, to be simultaneously both small and large, both heavy and light, both visible and invisible, like the legendary cat of Erwin Schrodinger's fictitious scientific experiment, which is both alive and dead at the same time.

According to quantum theory, subatomic particles exist in several states at once until they interact with the outside world. As a result of any measurement or observation, the particle passes into one of the stable states. Perhaps the only way to distinguish a wormhole from a black hole is to be inside one.

Wormholes are, in fact, the only possibility for interstellar flight. Therefore, despite their current fantastical nature, scientists will continue to study them.