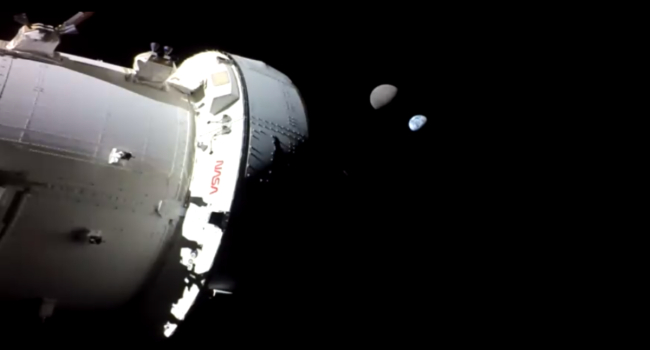 According to Space.com, NASA showed footage that Orion captured on Nov. 28, while 435,000 kilometers (270,000 miles) from Earth. Orion is flying in a distant retrograde lunar orbit, which means it is quite far from the Moon and orbits the opposite of the Moon's path around Earth.

Orion's flight to the moon can be followed in real time via a broadcast live from IBM showing footage from Orion's cameras.

The photos and videos from this mission are not just for inspiration; the information needed to organize the next Artemis missions: Artemis 2 is scheduled for 2024, and will take astronauts to orbit the Moon without landing on its surface. And in 2025, if all goes according to plan, the mission will start Artemis 3, during which astronauts will finally be able to land on the lunar surface.

The mission Artemis 1 launched in November 16 successfully: Orion spacecraft was launched on a super-heavy launch vehicle SLS.  In november 21, Orion made the first video of the moon and the same day entered its orbit and as close as possible to its surface - at a distance of 130 kilometers. Orion stayed on the far side of the Moon for some time and, as expected, lost contact with Earth.

During the mission Orion also took beautiful pictures of the lunar surface.

Now the mission is ongoing. The spacecraft is expected to return to Earth on December 11 and land in the Pacific Ocean.