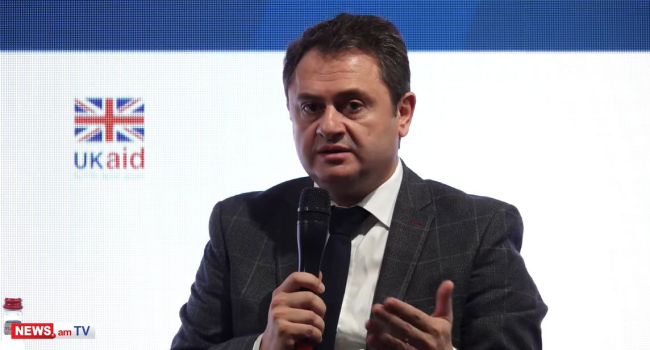 The sharp change in the currency market has already affected the leading technology sector, and the government's initiative to mitigate these losses is long overdue, it should have been done back in May, said Hayk Chobanyan, Executive Director of the Union of Advanced Technologies Enterprises, today, November 30, during the celebration of the 15th anniversary of the Armenian Investment Council of the European Bank for Reconstruction and Development.

"According to State Revenue Committee, the sector has a profitability of 15%, and we already had a difference of 20-25% in currency terms. This means that we cannot even discuss here how much the sector suffers. Moreover, it is an area of strategic importance for Armenia. All our future plans are greatly connected with the development of this sector. It means that losses greatly influence our plans for the future," he said.

"For example, in competing India the rupee fell, in Europe the euro fell, in Turkey the lira fell, i.e. this year we found ourselves in a much more uncompetitive position, and we put our companies in a very difficult position in terms of continuing their contracts. They are left to negotiate with their partners to raise contract prices," Chobanyan said.

Earlier today, Minister of Economy Vahan Kerobyan had said that the Ministry of Economy launched a support program for IT companies, which is in the final stage of implementation starting from September.

According to executive director of the Union of Advanced Technologies Enterprises Hayk Chobanyan, the government's initiative is overdue. This sphere, he explained, is so sensitive, and the competition is so great, that some air bags are needed at the level of the law, which are established and applied very promptly.

"Generally speaking, what we are expecting from the government tomorrow should have been in May. That support is already overdue. But it's not tomorrow, from the next day we have to look for long-term solutions," Chobanyan said.

He also spoke about the importance of infrastructure development. According to him, in terms of having special economic zones, Armenia is at a rather low level.

"It was critical, especially during the Russian crisis, when we saw that the country is simply not ready to accept business. Apart from individual private initiatives, we did not see any comprehensive, organized process. In other words, none of our places are building a special zone for those companies who want to move to Armenia. It is especially of strategic importance for us in terms of professional repatriation," he explained.

Hayk Chobanyan announced that the next topic to be brought to the discussion platform is the large-scale creation of special zones. "If we had some industrial zone that seemed too big for our economy, it would have been filled in the previous eight months. If we had 100,000 square meters of manufacturing space, I'm sure it would be filled today," he stressed.

In Armenia, in the last seven months of this year, four IT companies were liquidated, four more companies went bankrupt, the liquidation of 17 others is in progress, and 342 individual entrepreneurs were deregistered.

Deputy Prime Minister Mher Grigoryan had stated during the government-parliament question-and-answer session on November 16 that the matter of providing state support to IT companies with problems due to currency devaluation shall be resolved, but that he is personally against the legislative and fiscal changes.

"I don't know how the final discussion will end, but I am personally against the legislative changes that shall fulfill that adaptation function. And I am against the fiscal, too. Tax changes cannot be made, and fundamental legislative changes cannot be made in such cases. With the measure, I believe we will help and compensate the given loss—but with the right target," he had said.

On November 24, according to the government's decision, the provision of tax exemptions to start-up companies in the IT sector in Armenia was extended for another year.