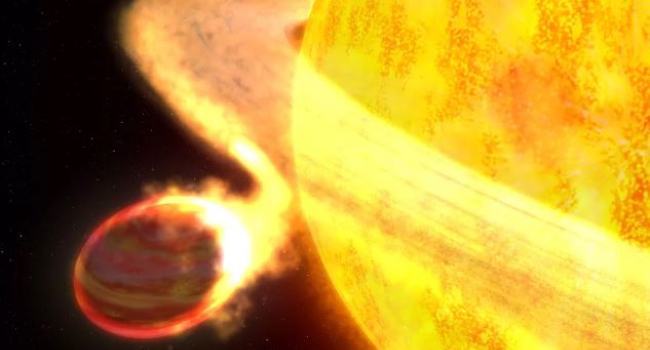 Planet-killing stars know how to hide their 'crimes': Scientists figure out how to identify them

Although stars have nurtured and cared for planets for billions of years, they can sometimes “turn treacherous and eat their children” and eventually “the evidence of that filicide sinks into the core of a star” so that no one will ever see them again.

However, as Space.com reports, astronomers have now discovered how to “to catch murderous stars red-handed” and how much time scientists have to conduct proper research “until the case grows cold.”

When stars are hungry

At different stages of their life cycle, stars can kill (although astronomers prefer to use the more scientific and polite term “engulf”) their planets. For example, at the end of a cycle, when stars like the Sun die, they swell, turn red, and become giant or supergiant stars.

And any planet that gets too close to that star can be engulfed by it. The outer planets of a given system could also be affected, as a change in the gravitational landscape caused by the impacts of dying stars could send planets toward their parent star. According to scientists, our solar system will also suffer this fate in about 4.5 billion years, when the Sun will then destroy Mercury, Venus and possibly Earth.

However, it is not only the aging of stars that can destroy planets. It also happens when they are young. The first days of solar system formation are particularly brutal times. It is during this stage that the temperature of the protostar at the center of the system increases, and its density also increases, sometimes causing huge plasma storms.

Meanwhile, planets begin to form around the star. The smaller pieces accumulate around each other, and the planet-like masses begin to collide, gravitationally destabilizing each other in an attempt to become full-fledged planets. Naturally, all this turbulence ejects some material from the system, and some material flows into the still-forming star.

Heavy elements flow toward the center of the star

The influx of planet-forming material into the central star can occur slowly or rapidly. In some cases, the flow of heavy elements reaches the star in millions of years. Then it is not a case of direct “planetary murder”, but rather a process of slow smothering of the ingredients needed to create larger worlds around the star. It also happens that a planet collides with a star and disappears completely, being absorbed by the star.

The large amount of energy and high thermal temperature inside the star is more than enough to completely destroy the planet, if of course the planet will still exist by then and will not be torn to pieces by the gravitational tidal forces as it approaches the star. An Earth-like planet would be entirely consumed in just a few years.

In this case, the only proof that a star “killed” one of its planets is an extra abundance of metals, meaning, in astronomers' context, any element heavier than helium. These are elements such as silicon, oxygen, and carbon, which are necessary for planetary growth. Over time, the absorbed metals gradually begin to move toward the center of the star, because these elements are heavier than the hydrogen and helium that make up the star's bulk.

How long does that cosmic “cover-up” take?

But how long does that cosmic “cover-up” take? According to preliminary estimates, the process described above could take billions of years, which means that any star we observe would not be able to hide its “crimes.”

But a new study published in the journal Monthly Notices is taking a more nuanced approach, trying to quantify how long this “evidence” can persist. To this end, the research team created simulations of dozens of stars and simulated situations of how and when stars might “eat” their planets.

Astronomers accounted for the fact that metal-enriched material inside a star will have different densities than its surroundings and that this can set up currents that drag those metals down faster than gravity alone would do.

Naturally, the answer is different for each star, as it depends on how massive the star itself is and how much planetary material it has absorbed. But in general, astronomers have found that stars cling to the metals on their surface for less than a billion years.

So, to find evidence of “planet-cide,” astronomers need to find a star younger than about a billion years old. Also, they can't just look at one individual star, because it's impossible to tell if that star absorbed a planet or was just born from that extra metal. Instead, astronomers should look at binary systems in which one star contains significantly more metal than its companion. It is in those limited cases, that is, in binary systems that are less than a billion years old, that astronomers can finally catch the “the criminal” stars.