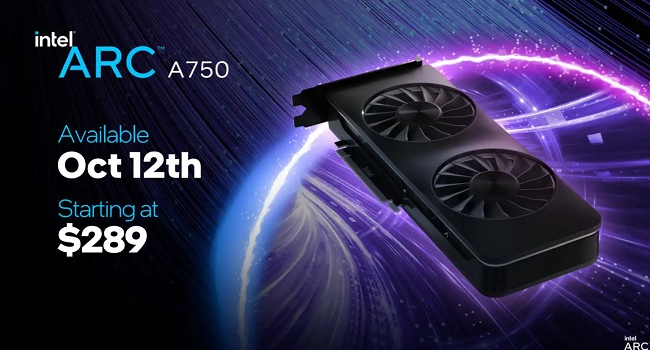 It's an “absolutely astonishing price that will reset the market,” Tom Petersen from Intel told reporters in a briefing.

The Arc A750 is slightly slower than the flagship A770, but Intel says it will outperform Nvidia's graphics card at both 1080p/Ultra and 1440p/High for more than 50 games. And that's despite the fact that the manufacturer's recommended retail price for the Intel graphics card is lower than the cost of the RTX 3060, especially if you buy the latter in-store (about $418).

Intel claims that their new graphics card not only costs less than the competitor, but also provides better performance per dollar. That, at least, is what the company's published graphics claim. However, we'll have to wait for independent reviews to be convinced of that, especially since all is not well with the performance of Intel Arc graphics cards in games.

The Intel Xe HPG architecture is optimized for modern graphics APIs (Application Programming Interface) such as DirectX 12 and Vulkan. These technologies are certainly gaining momentum today, but most traditional games - especially if they are not AAA games - are created using DirectX 11, and some still use the ancient DX9. Test charts published by Intel showed that the Arc A750 is just as good as the RTX 3060 in many games, but slightly behind in some others.

Nevertheless, Intel has claimed that the Arc's price matches its worst performance, not its best, and if the above charts are correct, that seems to be the case.

The two charts above show Intel's claimed advantage of the Arc A750 in terms of performance per dollar compared to the RTX 3060 in each game, not the original frame rate.

The Arc memory controller was designed specifically to take advantage of the larger memory chunks that can be obtained by activating the PCIe resizable panel bus. Intel systems with 9th generation Core processors have been updated to support ReBAR, but you're unlikely to want to buy an Arc if your system doesn't have PCIe ReBAR.

Anyway, the price of the Arc A750 is more than attractive, especially since gamers have suffered for many years due to excessively high graphics card prices. The price of the RTX 3060 is also quite high, and the GeForce RTX 4090 and 4080 price tags have caused a mixture of outrage and indifference among gamers.

If the Arc A770 and A750 are indeed not inferior to the Nvidia RTX 3060, and sometimes surpass it, with a much lower price tag, it could really reboot the GPU market.