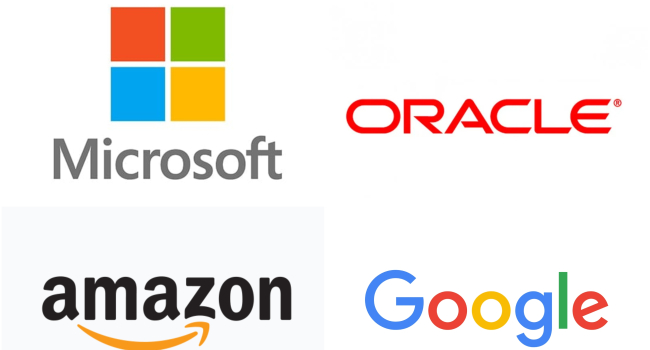 The US Department of Defense has hired four American IT companies to implement its cloud infrastructure development project. These companies are Amazon, Google, Microsoft, and Oracle.

The previous such project was carried out by Microsoft alone, and for this one it was supposed to be for $10 billion, but the US military quickly shut it down. Now Microsoft will get $2.25 billion at best.

Microsoft was not fooled

Microsoft Corporation has been included in a new project aimed at developing the Pentagon's Joint Warfighting Cloud Capability (JWCC) cloud infrastructure. A year and a half ago, the Pentagon made a drastic decision and shut another such project, the Joint Enterprise Defense Infrastructure (JEDI). The latter had the same goal, and Microsoft was the sole contractor.

As Fortune writes, this time the Pentagon has decided not to limit itself to just one contractor. The largest US IT companies—Amazon, Google, Microsoft, and Oracle—are part of the JWCC contract.

In the case when the original JEDI contract promised Microsoft $10 billion in revenue, in the case of JWCC, however, there is no question of such an amount. The total value of this contract is $9 billion, and it will be divided among all contractors. It is not known how much money each company will receive, but even if the $9 billion is split equally, Microsoft will receive $2.25 billion, which is 4.5 times less than the company could have received for JEDI.

In addition, Microsoft will not receive its share immediately, since all the tasks envisaged by the JWCC project must be completed no later than June 2028.

The JWCC project is scheduled for five and a half years, whereas Microsoft was supposed to implement JEDI within ten years. The company was awarded the JEDI contract in October 2019, although Amazon, IBM, and Oracle also had made bids for it. The companies that lost the tenders immediately appealed to the court, but their appeal did not yield any result at first.

However, already in July 2021, the JEDI project was shut. The Pentagon had explained that it does not want to entrust the development of its cloud infrastructure to just one provider, in this case—Microsoft.

As part of the JEDI project, Microsoft was to develop, operate, and further maintain and develop a cloud platform to store and manage classified data for the US military and defense industry.

On what principle were the participants selected?

It is not known whether the aforesaid US companies' appeal to the court affected the Pentagon's final decision on the list of contractors for the JWCC project. According to experts, it is possible that the Pentagon simply decided that its cloud project should be developed solely by the largest players of this market.

Amazon, for example, has 34% of the global cloud market, according to Statista.com's Q3 2022 data. Microsoft is second, with 21%, and Google rounds out the top three, with 11%. That is, three out of four contractors are indeed the largest players in the global cloud market, with a combined share of 66%. But in this regard, it is not clear how Oracle ended up in this quartet of JWCC contractors.

In Statista's ranking, Oracle ranks only eighth, with just a 2% global share. IBM, which also wanted to be involved in the JEDI project, has a 3% market share, as does SalesForce. Tencent and Alibaba are ahead of Oracle on this list, but the Pentagon would never trust them to build its cloud because they are Chinese companies. 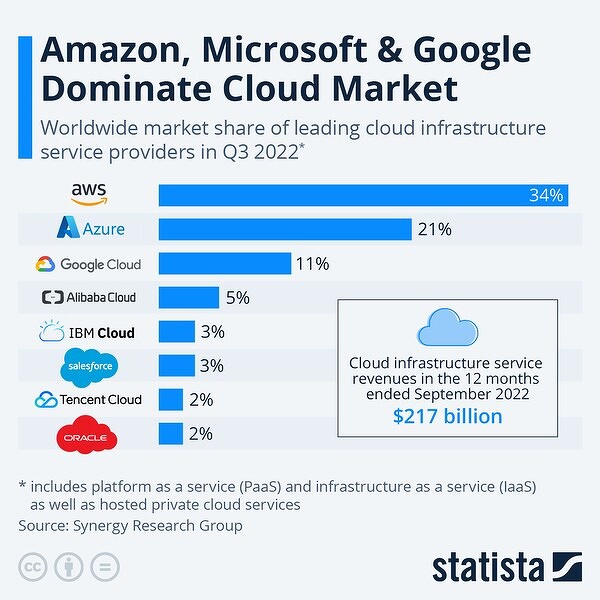 The Pentagon may have made its choice based on the fact that various US government agencies already use the cloud services of these four contractors. For example, Amazon provides its servers to about 5,000 such agencies, including the Central Intelligence Agency (CIA).

What does Trump have to do with all of this?

During the entire history of replacing one contract being signed with US government agencies with another contract, the name of famous businessman, former US President Donald Trump has been mentioned many times. In its appeal against the JEDI project, Amazon had claimed that Microsoft was unfairly recognized as the winner of those tenders.

Amazon had stated that they are sure that this could not have happened without Trump's intervention. Trump has openly criticized Amazon founder Jeff Bezos in the past. At that time, there were rumors that Trump was even ready to cancel the tenders for the JEDI project just so that Amazon were not recognized as the winner.

Microsoft had immediately responded at the time, saying Amazon's claims were baseless. The US Department of Defense also announced that Trump did not interfere in the selection process of the JEDI project contractor. However, in April 2021, the court examining Amazon's appeal emphasized that it could not rule out the possibility of Donald Trump's intervention in the process of selecting the winner of the JEDI project.