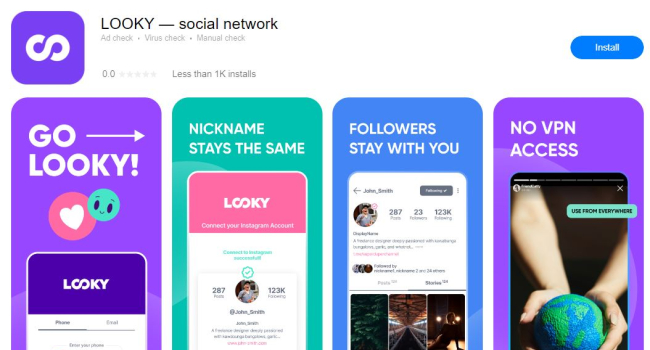 Looky: Russian-language version of Instagram launches in Russia, what new features does it have?

A new social network, Looky, has been launched in Russia. During the presentation of the project, its head Egor Yakovlev said that it is intended to replace Instagram and all of its main functions.

Investments in the new Russian social network amount to 160 million rubles. The creators of the social network expect to bring at least 10 percent of Russian users from Instagram to their platform by 2024.

Egor Yakovlev said that Looky retained all the basic Instagram features, such as posts, Stories, personal messages, filters, hashtags, etc. But they also added new features that users would like to have. For example, Looky allows you to post external links directly in posts (Instagram only allowed them in the profile header and Story), has a built-in loyalty program that uses blockchain and NFT technology. The new social network also has the ability to categorize posts into thematic folders.

However, this is not the only news of the new social network. Yakovlev noted that all Instagram data can be transferred to Looky "in one click." And not only the content itself will be transferred from Instagram, but also the user's nickname, as well as subscriptions to other profiles and the user's subscribers themselves (if they are already registered in Looky). After synchronization, the posts the user publishes on Instagram will also be published on Looky, but not vice versa.

The new Russian social network also has its own loyalty program. In exchange for posting, publishing Stories and attracting new followers, users will be incentivized by receiving so-called Looks. These can be exchanged for Looky gifts or additional features to become more popular. In addition, rewards are stored in a blockchain.

In addition, the new social network plans to introduce a targeting system and advertising tools next year.

The Looky app is available to download from Google Play, the App Store and AppGallery.

As a result of the Russian-Ukrainian war, Russia banned the social networks Facebook and Instagram, owned by Meta, from its territory.