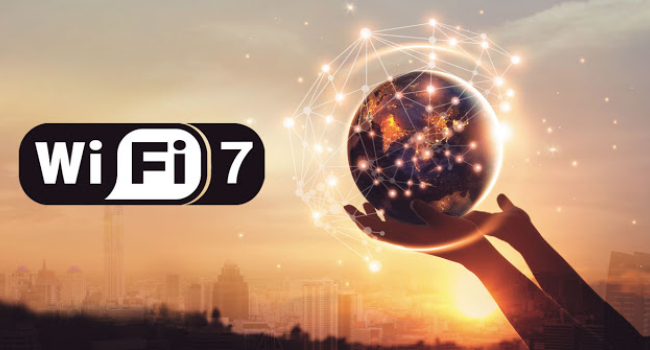 Wi-Fi 7 is just over corner: What do you need to know about it?

Many people have only recently switched to Wi-Fi 6, and have not even heard of Wi-Fi 6E yet. Yet Wi-Fi 7 is already on the horizon. MediaTek has promised to release Wi-Fi 7-based solutions in early 2023, and the first smartphones to support the standard could be released as early as 2024.

Meanwhile, leading companies in wireless solutions such as Qualcomm, Broadcom and Intel are accelerating chip development for devices that support the new technology. Many of the new chips will be based on TSMC's 6-nanometer process.

Wi-Fi 7 is the new Wi-Fi standard, also known as IEEE 802.11be. The seventh generation of Wi-Fi will offer significant improvements over Wi-Fi 6 and 6E: the new standard is expected to be faster, support more connections, and be more adaptive for reliable, low-latency performance.

Wi-Fi 7 will be widely used in entertainment (it will be possible to play various online games, use virtual and augmented reality devices, and watch streaming 4K/8K videos without buffering and delays), in smart home management (the response for all smart home devices will be significantly faster, there will be no more delays in voice control), and, of course, in business, where delays and network congestion can lead to several problems.

True, to take advantage of the new technology, you will have to upgrade routers, and access points, not to mention smartphones, laptops, and other devices.

Earlier this year, MediaTek, which has been involved in the development of Wi-Fi 7 since the beginning, first demonstrated the new standard and its capabilities. Their goal was also to showcase the capabilities of future Wi-Fi 7-enabled solutions in the Filogic family.

The company promised to release the first Wi-Fi 7-based solutions in early 2023. Most likely, these will be the Filogic 880 and Filogic 380, two modems that support Wi-Fi 7. The manufacturer showed them off in May of this year, but the exact release date is still unknown.

The Filogic 880 is designed for use in routers and is made on a 6nm process. It can provide four parallel data streams (MIMO 4x4) with a maximum speed of 36 Gbit/s (up to 10 Gbit/s per channel). According to the developer, there is support for OFDMA RU, MU-MIMO, and MBSSID technologies, as well as a dedicated host processor with 4 ARM Cortex-A73 cores and an NPU neural block (responsible for AI-based computing).

The Filogic 380 is also made using a 6nm process and can provide Wi-Fi 7 connectivity for smartphones, tablets, TVs, laptops, and other devices. Maximum data transfer speeds of up to 6.5 Gbit/s (MIMO 2x2, up to 5 Gbit/s in one channel). According to the developer, there will also be support for the Bluetooth 5.3 standard with LE Audio technology.

Following MediaTek, leading wireless solution makers such as Qualcomm, Broadcom and Intel are also speeding up the development of chips for Wi-Fi 7-enabled devices.

Many of these chips will be based on TSMC's 6-nanometer process. The chips in Wi-Fi 7 devices simply need to be upgraded from the current 16/12nm process to a more advanced 6nm process, which will provide an opportunity to reduce power consumption and heat dissipation, according to experts.

Intel and Broadcom recently demonstrated Wi-Fi 7 data rates of over 5 Gbps in a joint presentation on a Dell laptop and using a Broadcom access point with Wi-Fi 7 chips.

When all of these devices will hit the market is still hard to say, but the possibilities they could open up for us are intriguing.