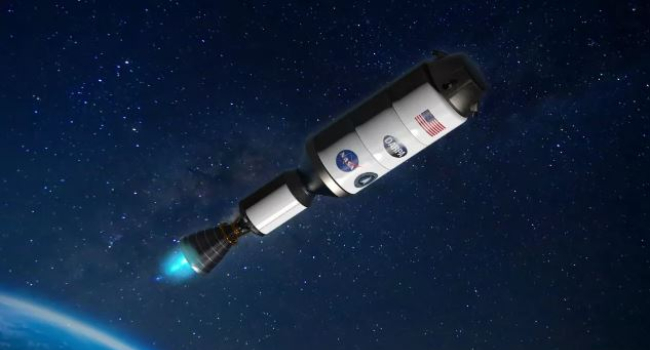 The US National Aeronautics and Space Administration (NASA) and the Defense Advanced Research Projects Agency (DARPA) have announced a partnership that aims to build a nuclear-powered spacecraft by 2027 and launch it into orbit. This, according to NASA, will several times reduce the time and resources spent on trips to distant space—including to Mars.

As Space.com reports, according to the agreement, NASA will join DARPA's Demonstration Rocket for Agile Cislunar Operations (DRACO) program, which was launched in 2021 in order to develop a nuclear thermal engine for a space rocket. It is a revolutionary technology that will enable the United States to expand the possibilities of future human spaceflight.

"NASA will work with our long-term partner, DARPA, to develop and demonstrate advanced nuclear thermal propulsion technology as soon as 2027. With the help of this new technology, astronauts could journey to and from deep space faster than ever—a major capability to prepare for crewed missions to Mars," said NASA Administrator Bill Nelson at the American Institute of Aeronautics and Astronautics (AIAA) Science and Technology Forum.

According to Space.com, new and more efficient transportation technologies will help NASA carry out missions to the Moon and Mars. And thanks to more powerful nuclear engines, it will be possible to carry more payloads for scientific research in space and use more powerful instruments and more powerful means of communication.

The NASA press release also states that a nuclear heat engine is three or more times more efficient than a conventional chemical engine.

NASA Deputy Administrator Pam Melroy said DRACO will be an important part of evaluating technologies that will take us further into the outer solar system. Also, she stated that their goal is to lead and develop a program for human exploration and sustainable presence in the Solar System.

"That is a very important goal. And we think that these advanced technologies will be a critical part of it. NASA has a long history of collaborating with DARPA on projects that enable our respective missions, such as in-space servicing. Expanding our partnership to nuclear propulsion will help drive forward NASA's goal to send humans to Mars," Melroy said.

Roles and responsibilities of the parties

NASA and DARPA have published an interagency agreement that defines the roles and responsibilities of each party.

Under the agreement, NASA's Space Technology Mission Directorate will lead the technical development of a nuclear thermal engine for the DARPA experimental spacecraft.

DARPA will be the client for the entire launch phase and development of the engine, including the reactor, which will lead the overall program, including the integration and procurement of rocket systems, all types of coordination, planning, safety and liability, as well as the overall engine assembly and integration into the spacecraft.

The idea of a nuclear engine was born decades ago

The vision of building a rocket with a nuclear engine is not new; it has a history of decades. NASA's Engine for Rocket Vehicle Application (NERVA) program aimed to send astronauts to Mars in 1979 in a nuclear-powered spacecraft. However, the program was canceled in 1972 due to budget cuts and concerns about the escalation of the Cold War.