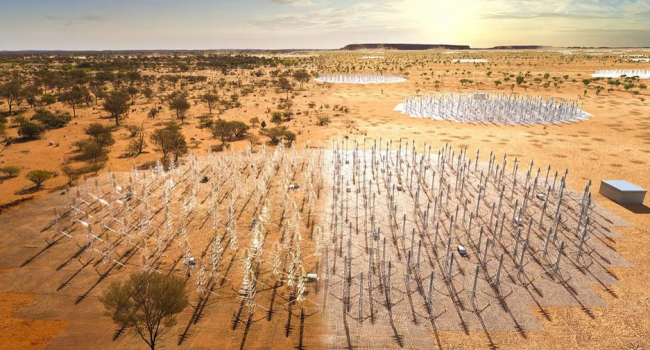 Scientists have been working on the development of the Square Kilometre Array Observatory (SKAO) for more than 30 years. Now, finally, Australia and the Republic of South Africa (RSA) have begun building radio telescopes as part of the project.

According to TheRegister.com, the Square Kilometre Array radio telescope, which has "sensitivity unheard of before," will probe the sky in search of answers to a range of questions about how galaxies form, what dark matter is and so on.

This is a chance to see the very first stars in the universe and how they lit up, said astrophysicist, radio astronomer and Australian National University professor Naomi McClure-Griffiths in a video posted by the Australian Academy of Sciences on Twitter.

The Karoo region in South Africa in the Northern Cape and Murchison County in Western Australia were chosen to build the observatory because they are far enough away from populated areas and are not "contaminated" by stray radio signals, moreover, there is little chance that random people with cell phones will wander in and spoil the signals. All of these factors make these regions optimal for observing the Milky Way.

According to SKAO's operating partner, the Commonwealth Scientific and Industrial Research Organization (CSIRO), SKA-Low will cover an area of about 74 kilometers, which will also house existing instruments, including the radio telescope's predecessor with 36 antennas, the Australian Square Kilometer Array Pathfinder (ASKAP).

In total, the project will consist of 3,000 15-meter dishes and thousands of low-frequency aperture telescopes with more than 130,000 antennas. The low-frequency telescopes look like two-meter metal Christmas trees.

The first phase of the project, including the installation of the aforementioned 130,000 antennas, is scheduled for completion in 2028. But by 2024, four parabolic antenas in Australia and six antenna stations in South Africa should already be working together to show that the system is ready for a comprehensive deployment.

The observatory is expected to process a colossal 130 petabytes of data each year.