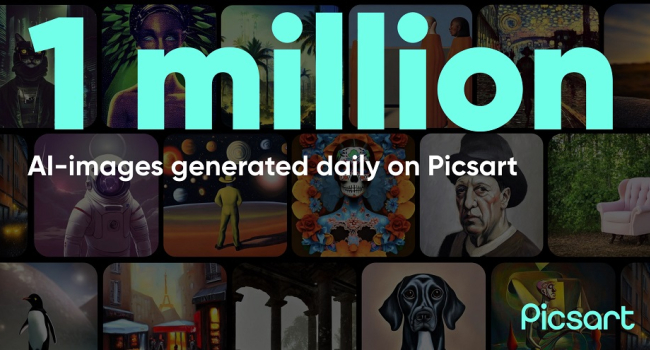 AI Image Generator from Armenian company Picsart creates a million images daily on iOS. Soon the generator will be launched on Android as well.  Picsart's AI Image Generator was launched earlier this month on iOS and the Internet: thanks to AI, millions of users were able to image in seconds based on simple text prompts. The resulting images can be edited using thousands of filters, fonts, stickers and other tools, all within the Picsart app or the web version.

Since launching, AI Image Generator has created more than 10 million images, many of which have been added to Picsart's free library - now available to the entire community of subscribers.

"We're thrilled with the great response this new feature has received in such a short time," said Mikayel Vardanyan, director of product at Picsart. "It really shows how far Picsart has come and how active our community is. People really like the idea of using generative AI for creativity."

The company also recently integrated an "auto-select" prompt feature for AI Image Generator, which will help users better understand how to write text prompts to get the best results.  AI Image Generator is expected to arrive on Android in the coming weeks. For now, the generator is available on iOS and Picsart.com. Examples of images produced by the generator can be viewed at @ai_generated.

Meta recently introduced the Make-a-Scene project, which generated images based on text. Now the company has introduced a new project with even more advanced artificial intelligence, which allows people to turn text descriptions into short video clips.