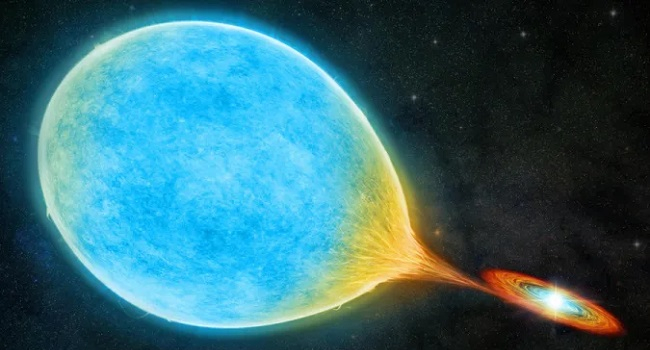 Amazing phenomenon: scientists discover how a small and dead star absorbs a large one

Unlike our Sun, many stars in the Milky Way are not "solitary": they are part of binary systems in which two stars orbit each other. Some orbit particularly fast: for example, scientists have discovered two white dwarfs that take only five minutes and 21 seconds to make a complete round around each other.

Recently, scientists from the Massachusetts Institute of Technology and other organizations have discovered another interesting binary system in which one star absorbs another. The researchers used data from the Palomar Observatory in California and telescopes in Hawaii and the Canary Islands.

These stars are about 3,000 light-years away and belong to the class of “cataclysmic variables”. This is when a star, similar to our Sun, orbits a white dwarf. So why are they called that way? Variables are stars with changes in apparent brilliance over time. In addition, they can exhibit cataclysmic (e.g., flare) activity.

The system of two stars observed by scientists is about 8 billion years old. They orbit each other every 51 minutes, which is considered the shortest known orbital period for a cataclysmic variable system.

“When stars die of old age, they become white dwarfs. But then this remnant began to eat its companion,” MIT astrophysicist and lead author Kevin Burdge told Reuters. “Before the second star could end its stellar life cycle and become a white dwarf, as stars usually do – by evolving into a type of star called red giant – the white dwarf remnant of the first star interrupted the end of the companion's life cycle and began slowly consuming it.”

The white dwarf absorbed hydrogen from the outer layers of its partner, leaving a lot of helium on the latter. The shape of the latter became drop-shaped due to the gravitational attraction of the white dwarf. And this, according to scientists, is one of the reasons for the change in the brightness levels of this binary system.